The Lviv Christmas and New Year season is much longer than in other countries. Ukrainians celebrate Christmas on 6th and 7th of January and even until the middle of January there are holidays that are related to Christmas in Lviv. But Lviv also has a long tradition of Roman-Catholic Christmas as well, as the Polish people of Lviv have always celebrated it as well. That’s why many events already start in the middle of December in Lviv. And of course, New Year is right in the middle! Come and see some traditional Ukrainian Christmas in the most beautiful city of Ukraine!

The Lviv Christmas Market is a rather new one. Nevertheless, quite a few people come to see it every year. There are more than 100 huts in 2 different locations: On Rynok Square and in front of the Opera on Prospekt Svobody. Many of them sell local crafts and exhibit products related to the winter period in Ukraine. Also, they have some entertainment for kids as well as food stands and places that sell tasty mulled wine for adults. The Lviv Christmas Market in 2021 starts on Friday, December 17th, 2021 and it runs until after Ukrainian Christmas on January 19th, till the Ukrainian holiday of Vodokreshchyna, when people go ice bathing.

At the market there is usually a hut for kids for St. Nicolas, which in Ukraine is celebrated on December 19th. Often St. Nicolas can be found walking around the Lviv Christmas Market though. Also usually there is a Christmas Packing Shop and Post Office right in front of the Lviv Town Hall on Rynok Square.

Opening of the Christmas Tree at the Lviv Christmas Market

However, traditional Ukrainians actually don’t care that much about the Christmas tree, as this tradition is rather a Catholic one and has arrived in Ukrainian households rather as a New Year Tree during Soviet times. The actual Ukrainian Christmas “tree” is actually a different decoration. The so-called didukh represents the spirit of the ancestors, that’s why it’s literally called “grandfather”.

It’s symbolic and is traditionally taken from the first wheat of the harvest of that year. Each year there is an unveiling of the largest didukh in Lviv. Usually it happens during the day of January 6th, which is Ukrainian Christmas Eve. It’s always situated on Yavorskoho Square, just a couple of meters away from the Lviv Christmas market.

There is also traditional Christmas Parade in Lviv which happens usually also on January 6th. The parade with many kolyadnyky (carolers) and people dressed in various Christmas dresses starts at the Square in front of the Dominican Church. It’s really beautiful and a great opportunity to take some pictures of the traditional Christmas celebrations in Lviv.

Nativity Scene in front of the Lviv Town Hall

‘Of course, Lviv also boasts a traditional Nativity Scene. It’s actually quite large. Since 2015 the hand-carved nativity scene has been standing in front of the Lviv Town Hall and is still growing. You can see it more or less for the entire Christmas period, roughly from mid-December to mid-January.

Most Ukrainians celebrate Christmas Eve with their families. That’s why on January 6th and 7th the city will be rather empty of locals when compared to other days in winter. The Ukrainian family Christmas dinner is actually a thing celebrated rather in the own family and foreigners are not often invited. If you didn’t happen to get invited by a Ukrainian friend yet, you don’t have to be upset though.

Traditional Christmas at the Museum of Folk Architecture

For Christmas at the Hai, the houses of the Museum of Folk Architecture will open their doors. There will be serval master classes for crafts available for visitors and there will be the Christmas tales presented. Most importantly. a lot of Lviv citizens come here to sing traditional Ukrainian Christmas carols (kolyadky). It is one of the highlights of the Lviv Christmas season.
Museum of Folk Architecture, Shevchenkivskiy Hai, Cherneha Hora Street 1, Lviv

You might have seen the crazy Eastern European tradition of ice-bathing. While in most former Soviet countries do it for non-religious reasons, in Western Ukraine people remind with it on the baptism in the river Jordan – hence the name. Ukrainian Epiphany or also called Vodokreshcha, is the ice bathing that takes place on January 19th in Greek-Catholic and Orthodox parishes. In Lviv and around it is also celebrated.

People dive at least 3 full times under water. Some people try to stay in for a few minutes. All are blessed by the local priest. If you wanna dip in too, there are several locations in Lviv and around. The two regular spots to just watch or take a dip:
Horikhoviy Hai, next to Lviv Film Center, Kovaleva Street 22, Lviv
Brukhovychi, Lake at Pid Osovoyu Street

Enjoy the Lviv Christmas Market and celebrations in Ukraine

We think Christmas and New Year are a great time to come and enjoy Lviv. If you want to have a special Catholic Christmas, come to Lviv to enjoy the city being very lively and not as family-like as at that time in the West of Europe. If you want to enjoy a Ukrainian Christmas, then you must come on January 6th and 7th and see the real Ukrainian Christmas traditions. And who knows: Ukrainians are such nice people that you might even be invited to someone’s home to celebrate with them. 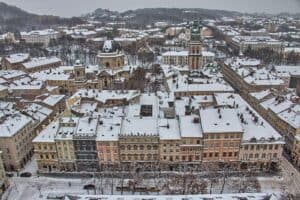 Lviv winter activities – How to survive extreme cold in Lviv

It can get pretty cold in Lviv in the winter. All the more reason to know what things you can do when it gets cold to enjoy your time in Lviv to the fullest. 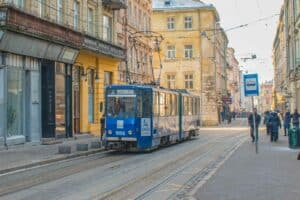 Lviv Public Transport – How to get around Lviv

Lviv is one of the most frequently visited cities in Ukraine. And there are many reasons for that: beautiful architecture, great cultural diversity, vivid social 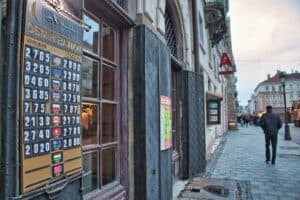 Lviv currency exchange – How to exchange money in Lviv

Currency exchanges are a tricky topic. You always are suspecting to get cheated. Therefore it’s good to know, which currency exchange offices are ok to visit and what to watch out for.

Lviv Buddy is a member of the Free Tour Community, a global network of independent local initiatives operating in the pay-what-you-wish model.